As I have written before, I am a bit of a political geek although its something only those really close to me know.  Politics does seem to be one of those topics you simply don’t discuss so I explore it through Radio 4, broadsheets and social media.  Social media is wonderful for allowing me to engage with other like minded individuals and I love the wit, remarks and reflection of Twitter.

There was never any doubt how I would vote in tomorrow’s referendum.  I was born in the year we joined the EU, studied languages and European politics at university, lived in Europe for a year, have seen the value of EU grants in some very deprived areas and schools in which I have worked and believe that we are more successful when we work together to achieve our goals.  This doesn’t mean that I am naïve to the weaknesses of the European government and there are significant issues to be addressed on  how the institution works, but I believe that change must come from within rather than outside.

I was looking forward to the Europe debate but to someone so passionate about politics it has sickened me with its vitriol, hatred and scare mongering.  It has not been an arena of political discussion but has encouraged extremism and fear.  Immigration should not have been the prime focus of the campaign, the EU is about so many more important themes, trade, rights, etc.. yet the Leave campaign and its spiteful rhetoric has put this at the heart of everything. 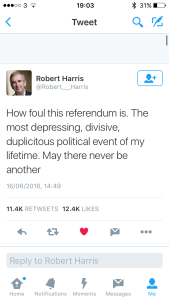 At the weekend, when we ventured across the country, I was genuinely shocked when I  saw posters stating we want our country back.  I am a proud Brit and appreciate the culture, spirit and innovation of our modern society, our country has evolved and I don’t want the Great Britain of last century, I want the multicultural, quirky, respectful GB of today.   I don’t think the Leave campaigners understand the modern, digital world, we cannot survive with a policy of splendid isolation, countries have a lesser role in a world where some multi national corporations have bigger budgets than states, where the Internet has made borders irrelevant, we are not the great power they want to believe we once were or could be again, its a different world.  I  am worried about the future leadership of our country if leave is successful as I don’t think the leaders of the Leave campaign have the integrity, intelligence or innovation to lead our country as inevitably they will in time. This has been another of the failings of their campaign, there is no one that I believe could lead a strong, powerful, inclusive nation.

This referendum is being defined by generations and a high turn out from either young or older voters could swing the polls either way, with the young supporting the in campaign heavily.  Our mock referendum at school reflected the result among other schools across the country, a resounding victory for remain. Perhaps there is hope for our future generation of politicians and decision makers!

I will vote tomorrow and I have no doubt that I will then be awake all through the night for the result, I only hope its a sweet dream and not a nightmare result.