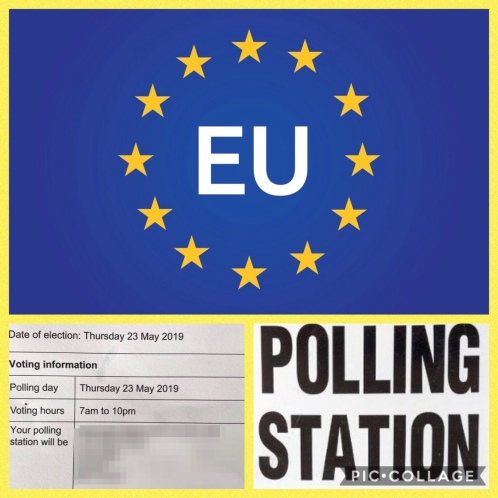 So another Thursday in May and another election, I’m sure for turnout and efficiency it would be far easier to have just one polling day.  It seems that turnout is expected to be low today; at our polling station there were half the number of tellers, boxes and booths from the local elections a few weeks ago, where the turnout was around 42%.

Personally, I think that this is going to be the biggest protest vote election ever and I don’t believe that the results will reflect what would happen in a general election.  Today angry people are making their vote, others disillusioned with politics are trying a different approach and many are not voting, through apathy or disgust at the current political situation.  Whilst I never reveal my vote, I’m one of those trying a different approach today, with Proportional Representation in place for European elections, my vote does count.  PR is a voting system I would like to see in British elections as it would remove the power from the two main political parties and offer a platform to many more.  We have to develop a more consensus approach to policy making on key issues such as Europe, the environment, social care, the NHS etc.. and our current system does not encourage this, there are too strong party lines.

With the results not due ’til Sunday night, there’s no late night election viewing for me tonight, just a wait for Sunday and the results.  We’re only one country in the European elections so for all the fascination in our results it won’t have a huge impact on the make up of the parliament, 73 seats of the 751 contested are for British MEPS.  However the results will arguably have more of an impact on our domestic politics and for a political geek like me more opportunities to question and ponder our political system.