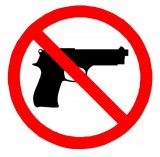 After a period of horrific gun crime with the murder of black worshippers in a church in America and tourists sunbathing on a beach in Tunisia I really found it difficult when Little Man wanted to play with his gun this afternoon. I never wanted him to have the gun but he got it at Disney in Frontierland, as a surprise treat from Daddy to go with his cowboy hat. Daddy thinks its harmless fun, it is brightly coloured with no caps or bullets but to me it still is a gun and I feel very uncomfortable that my son plays with a weapon. Mr S did sense my discomfort today and the gun has been hidden away but how do I resolve my anxiety? His other toys have weapons, his current obsession is Star Wars, the Storm Troopers have gun like weapons and a light sabre can be used to maim yet the fantasy nature of the characters make this seem less realistic than a gun. As much as we try to protect our children they see and hear bits of the news and ask questions which can be very difficult to answer. I truthfully explained to Little Man today that I did not want him to play with his gun because bad people have hurt people with their guns recently and that has made me sad. I only hope is interest is taken by other toys and that the toy gun can remain hidden.