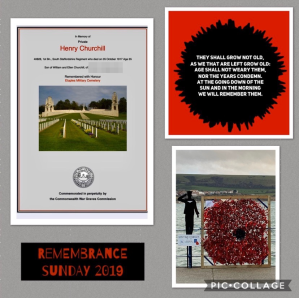 After the beautiful community project to commemorate the centenary of the end if World War 1 in 2018, I wondered if this would be a quieter Remembrance Sunday. In fact the service at the War memorial was very busy with possibly even more people than last year.

Our Remembrance took a personal turn this year as we ended up researching and adopting a local soldier. Little Man represented his school at the schools’ service on the Friday preceding, where the local children present art and readings in memory of the fallen. After the church service they parade to the war memorial and plant crosses in the garden of remembrance ready for Sunday. When he came home Little Man told us all that his cross was for Henry Churchill. This triggered research on the internet and we were able to find out that Henry Churchill was a 35 year old soldier in WW1 from a small hamlet near us. We found out where he was buried in France and the inscription on his grave chosen by his sister.

On Remembrance Sunday Little Man was again at the service and parade this time as a cub. It’s a big parade with veterans in old military vehicles, a military band, uniformed groups, dignitaries etc following on foot. The parade streets are lined by the public, showing respectful silence until the last group whom are the serving soldiers from the nearby military base, these are greeted with polite applause. Unusually our town’s service is always in the afternoon with the silence around 4pm as dusk starts to fall. It is very atmospheric as the memorial is on a hill by the seafront and the only sound are the waves lapping the beach.

As I stood in silence I did pray for all our war dead, however a very special prayer went to Henry Churchill and those brave pilots from my Gramps’ 609 Squadron. We do remember and I have faith that we always will.