During the Easter holidays, I spent some time at my parents’ house sorting through old photographs.  I love seeing old photographs of friends and family and wanted to find a few favourites of my parents and grandparents to make copies for my collection.

In the big box of delights was a battered old album from World War 2, it begins with this joyous photo of my grandfather, Gramps and then contains fewer photos of him and more of daily life in the RAF.  I was intrigued by this album as so little is known about his military service, I know Gramps was ground crew in the RAF, working as an electrician, his life long career and that he was based for a time in the south of England but that was all the information.  I was always puzzled how a Scotsman could end up in a base in the south but thanks to his meticulous notes on the back of photos and the Internet I have been able to piece the early part of his military service.

Gramps began his military service in Drem in Scotland, close to where he lived.  The photos all show 609 Squadron and following research I understand that this squadron spent time in Drem, Scotland, the north of England, before moving to RAF Northold for Dunkirk and then Dorset and Hampshire for the Battle of Britain. 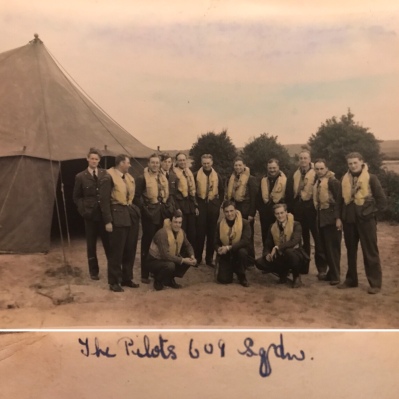 609 Squadron was a Bomber and Fighter squadron and I have been brought to tears learning about the squadron, the heroic actions of the pilots and the high number of fatalities.  Gramps wrote details on every photo and I have been able to research some of the individuals featured in the photos.  Its been heart-breaking research and it makes me think that the reason that Gramps never spoke of the war was the sadness at so many colleagues killed in action.  Gramps was so kind, loving and caring, a devoted family man and loyal to all his friends. He was quiet and dignified and I think his silence was his respect to his colleagues. 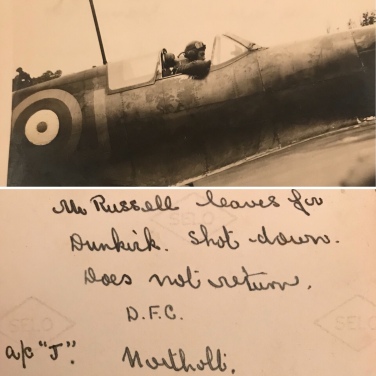 These photos show F.O. Ian Bedford Nesbitt Russell in Scotland a few weeks before he was tragically killed supporting the allies at Dunkirk. For me it is the difference in the pictures, a relaxed young man in Scotland on the airfield and then the pilot leaving on his final flight.  In doing the research I learnt that Russell was a young Australian from Melbourne.  I am sure that Gramps would be very proud to know that his eldest grand daughter now works as a paediatrician in the same city.

Another photo shows Sgt Alan Feary whom was killed in October 1941, his grave is not too far from our home and I would like to visit it and pay my respects to one of my Gramps’ colleagues  I have seen a number of the photos including this one from the album on the Internet so I am presuming that they were distributed to many of the staff of 609 Squadron.

Whilst the photos have really brought the history of the second world war to me and I have enjoyed researching 609 squadron, I still know little about Gramps’ war service.  My parents are visiting family in Scotland soon and I am hoping that they will be able to find either his service number or NI number so we can request his service record.  This really is a fascinating photo album and illustrates the sacrifices made by Gramps’ generation for us all, they will never be forgotten.